"We just had a call for an injured dog." She rolls up in her animal rescue unit, to an intersection where a dog was hit by a car. A man who witnessed the accident hands over a frightened white poodle, no more than a year old. Woodside says, "the dog was out loose, saw a mother and child cross the street so the dog tried to follow them and that's when he got hit by a car." Scared and hurt, the dog is comforted with water, and a toy. Woodside puts him in a compartment to take him back to headquarters to be checked out by a vet. She says, "he has a couple of injuries in his hind legs, he doesn't have tags, no license, no microchip so hopefully his owner will come in and look for him."

The calls keep coming in, and they range in severity. "We've seen everything from animals that are neglected and may be underfed. There's animal cruelty where people will actually harm animals using weapons or household items to hurt animals.

Her next call is to a resident who captured a possum in their yard. Woodside says in those cases, "we'll relocate the animal away from houses and away from businesses, basically where the animal can remain wild." Woodside's vehicle is equipped to make sure she can handle any situation and to ensure the livelihood of the animals, "we are ready to rock and roll, we have water, toys in case someone needs extra comfort, you can hear our fans running, we have air coming from inside to keep them cool."

Back on the road, she's constantly mapping out her next assignment. Her next call is to pick up a litter of kittens, less than 10 days old which were found abandoned. "The kittens are very young, they look malnourished, without mom," Woodside says, "somebody had a free roaming cat, that had a litter on someone's property now we have a litter of kittens that don't have a mother and that aren't receiving vet care or the care that they need." The kittens are also brought back to base for vets to examine. Doctors treat injured pets and stray animals.

Woodside brings out the white poodle which was hit by a car for the vet. The doctor says the poodle suffered either dislocated hip or a high fracture,and the dog can't walk on it's hind legs. If he isn't claimed by his owner, this poodle will have to be put up for adoption. And the kittens? The vet tried to remain positive but they're malnourished and looking for food.

More than a week later, we checked in with Woodside to find out how the animals were doing. The poodle had his surgery but still doesn't have a home. Sadly, the kittens didn't make it. Woodside says, "this is a perfect example of what overpopulation is and sends a clear message to our community we need them to be responsible in taking care of their animal and part of that is spaying an neutering."

Responsible pet owners should also make sure their pet is collared, tagged and chipped. Right now the Southeast Area Animal Control Authority is hoping their older pets will find a home this holiday season. Adoption fees are only five dollars for pets five years and older. 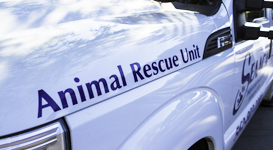 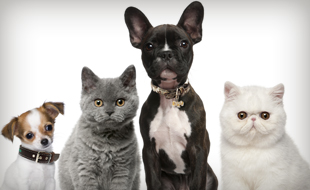